About a month ago I posted about some gray foxes in the Sierra Valley.  We got pretty good shots of mom and pup.  Well, I had also set an IR camera up on video at the same set, that I only now downloaded.  I had forgotten it was set to video and thought it was on still image so I was not all that excited about looking at IR stills when I had the nice color homebrew pics.  See I have a ScoutGuard model that has the programmer and image viewer on a remote control.  I don't have a clue where my remote control is, hence how I did not know whether it was set to video or still.

So I was pleasantly surprised when I downloaded the files and realized they were videos.

But first a still shot from the next morning to set the scene a bit in your mind while you watch the videos. 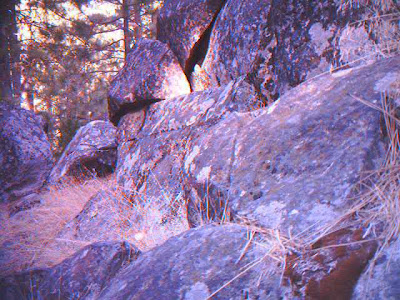 These first couple of videos do a great job of showing just how little the gray foxes care about the homebrew white-flash.  The homebrew gives a couple of early flashes (red-eye reduction mode) and then gives the big flash and takes the image.


I thought we had a mom and her pup. But in this video (88) it appears there are three maybe four individuals.  You never see more than two at a time, but unless exits the scene at the bottom one circles back around and re-enters the scene from the top in a matter of seconds mom may have had more than one pup.


In this video one fox finds the camera and moves it around a bit.