Hello folks. This is an installment of an occasional brew post series that will occur at Camera Trapping Campus.

As Jake mentioned, he focuses on the West Coast Ales with his UCSC lab chums, while I apparently dabble in the "hipster" side of brewing.

A mixture of herbs, Gruit Ale was a popular beverage in Europe until the 16th century (the theories behind its fading glory are rather interesting).  I was introduced to the drink at the great Workshop in San Francisco's Western Addition, which was offering classes in brewing Ginger Beer. These were led by a fellow named Scott Mansfield, who in addition to teaching us how to make the traditional, alcoholic Ginger Beer, brought along a baby keg of Gruit for us to sample. Also, as a class attendee, I walked home with a bag of herbs to make my own Gruit: yarrow, St. John's Wort, mugwort and a pinch of wormwood. These herbs are known for their psychoactive qualities and for you ladies out there --  regulating cycles.


It took several months, but an attempt at the Gruit finally occurred. Together with my brewing chum, M., this would be the first true brewing experience.

First the herb mixture sat steeping in a simmering pot. 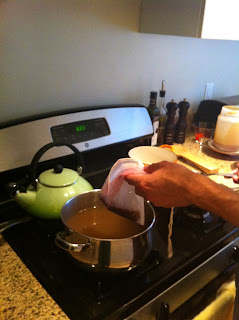 Then poured into a gleaming new carboy, "Bubbles". 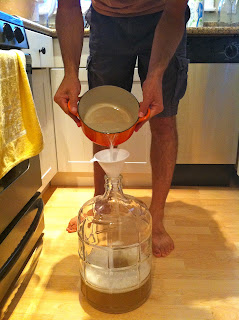 Yeast and malt syrup were added and Bubbles was locked up for about 7 days. After a week of fermenting, a tablespoon of corn sugar was added to 12 oz. bottles, along with the Gruit and the ale was given time to carbonate and mellow out.

Served in a frosty glass, the ale proved to be exceedingly smooth and tasty. A great success for a first attempt at brewing! 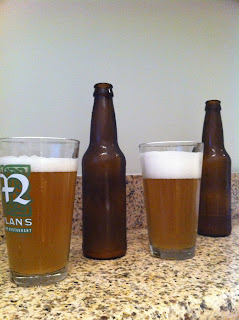 Posted by christian at 1:05 PM