"Why think about that when all the golden land's ahead of you and all kinds of unforeseen events wait lurking to surprise you and make you glad you're alive to see?"


In the middle of February, most Bay Area schools include a week to catch one's breath known as "ski week".  The lady and I took the week as a chance to get out of the city and explore the southwestern deserts in Zion and Death Valley National Parks. Both parks were new to me and both provided incredible sights and experiences even while we merely scratched the surface of each.


Of course, a camera trap was brought along -- the Sony s600 homebrew, which has been eternally existing in various states of malfunction.


Kind folk put us up in Rockville, a sleepy town just outside of Zion. The first night was a swell welcome to the wild: while gazing through the skylight at the brilliant display of stars, a pack of coyotes howled maniacally in the near distance.


Of course, my trap was not yet set up -- though I don't think it would have mattered:


The nights in Utah were cold and frosty. When packing, I failed to go through my trapping checklist and forgot desiccants.  For those of you in the colder climes, would desiccants have solved this problem? Rain-X on the glass plate?


Next up, Death Valley.
The high from Zion was intense and with our overworked minds and bodies now revitalized, we soared like the condor along Utah State Route 9.
Our thermal back to CA went through the mighty town of Ka-NAB, Utah. There, a deer roadkill was on the side of the road with an eagle tearing at its rib meat. A slam on the breaks and I leapt out the vehicle. I discovered the eagle had some buddies -- two California Condors! 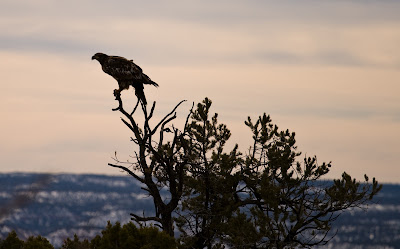 On to Death Valley...

Camera trap success was finally achieved with the s600 the first windy night! 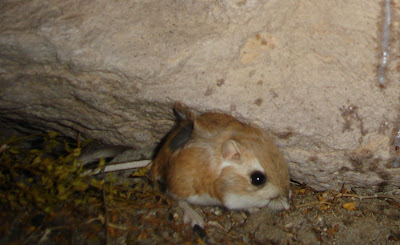 I lean towards Merriam's.


The final notable adventure was a ramble to Darwin Falls, on the western edge of the park. Viewing the lower falls was a great experience, but with a little scrambling over rock edges, being alone at the upper falls was truly magical.

The trip was a fantastic introduction to both parks, with plans for future adventures and their needed resources already floating around my head.