Our first featured Wildlife Photographer is Sebastian Kennerknecht.  I first heard about Sebastian's work from my girlfriend who saw his images at a company "craft fair" just before the Christmas Holidays.  I was very impressed when looking over his website pumapix.com  Then a couple of months later Sebastian commented on our blog.  I was quite excited to know he was a reader of ours (of course through the Codger).  Sebastian and I met up recently in Santa Cruz and he helped me set-up a camera whose pictures you will be seeing in a few weeks or so. Our set-ups are much different than his DSLR camera traps so it was fun to swap stories.  CTC campus looks forward to more camera trapping with Sebastian in the future and of course seeing more of his stunning "standard" wildlife photography.

Sebastian grew up in Munich, Germany and moved to the United States when he was ten years old. His fascination with wildlife began in Europe and only increased once he saw the wilderness that America has to offer. Wildlife became his passion and he studied Behavioral Ecology at the University of California at Santa Cruz to further his knowledge about animals. His current mission is to showcase the beauty and intricacies of nature while highlighting the critical need for more conservation efforts through his images. He loves to photograph and experience the animals he sees and wants to share these stories through his images. This, he hopes, will inspire others to help fight for the conservation of these amazing creatures.

Sebastian's photographs are available for purchase at his website or licensing through Minden Pictures.

CTC: What is your most distinct wildlife memory from childhood? The time when you knew chasing animals was going to become a passion.
SK: Living in Germany meant that wildlife was a little harder to find but my family had a pond in our backyard so we saw a whole ecological system on a small scale. I still distinctly remember watching dragonfly nymphs crawl out of the water onto reeds and transform into their adult stage. We (my siblings and I) would also collect frog eggs and put them into the pond, seeing the tadpoles and adults as the months went on. That little pond was what really started to fascinate me about nature and wildlife. 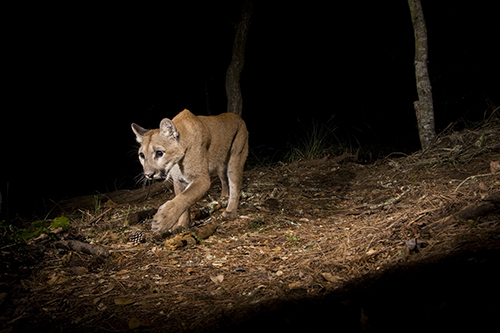 CTC: Obviously, we have to feature your amazing puma camera trap image. Can you take us through your thought process on setting up this set and the emotions you must have gone through when seeing the image for the first time?
SK: A friend of mine who lives in Aptos told me about a natural spring on their property, so I went to check it out and the spring was surrounded by an extensive labyrinth of game trails. It seemed like the perfect location for a camera trap and I set it up hoping to get pictures of anything and everything (of course as you know, when setting up a camera trap you always wish for a mountain lion image in the back of your mind but you never expect it). The camera trap had been up for eight months before I got this image of this juvenile puma taken on June 8th at 4:35 in the morning. The crazy part was that at the time this image was taken I was in Pennsylvania and wasn't back in Santa Cruz until August. My dad had switched the batteries in the camera for me during that time and had seen that I got this shot. When I returned he told me I should really go check the camera and I told him I'd do it in a few days but he was insistent so I knew something special was going on. As soon as I saw the picture on the back of the camera I was ecstatic and jumping up and down (even though truly me feelings can't be accurately described of how happy I was). I had been wanting to get a Mountain Lion picture for four years and there it was, I couldn't have dreamed of a better moment. To this day seeing this image is something incredibly special to me and I don't think that will ever change. 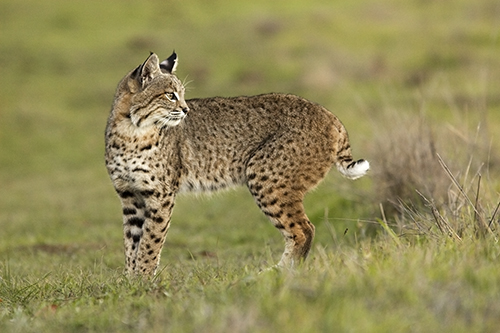 CTC:  I love the look on this bobcat's face.  Where did you get this image and what was the bobcat looking back at?
SK: I spent four years looking for bobcats while I was at UCSC only to see two for seconds at a time. While hiking at the border of Wilder Ranch State Park and UCSC I came across a bobcat hunting in the meadow. I photographed her all evening long and came back for the next two weeks. After the first day I also met her cub which was pretty close to being independent. I called him Henry (not sure why but it seemed appropriate). He would follow his mother on her daily hunts, staying a few yards behind. He seemed to gain confidence every day but every so often he would look back at his mom seemingly for reassurance. This picture is of one of these moments. I still treasure my time with these cats as they weren't bothered by my presence, often letting me get within 15 feet of them. 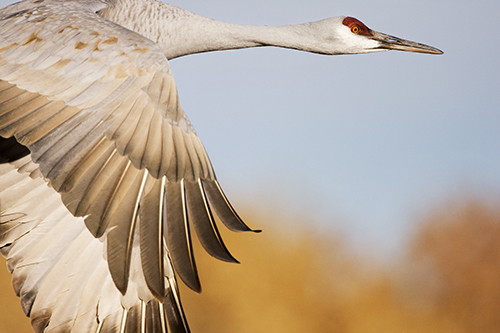 CTC: I saw Sandhill Crane's for the first time in the Sierra Valley after taking the Codger's Camera Trap class last year.  We only saw a couple of pairs not the giant flocks you saw in New Mexico.  This is such a stunning photograph. What type of lens and exposure conditions did you need to take this picture?  Any advise on trying to photograph birds in flight? What was Bosque del Apache like in a few sentences?
SK: Even though this bird was probably only about 12 feet away I still needed to use my 500mm f/4 lens with a 1.4 extender to get this uncropped image. Its a shallow depth of field to blur the background and a third of a stop under-exposed to maintain details in the white feathers of the bird.

In terms of photographing birds in flight, I'd like to first say, it's not easy so people should not get frustrated, everyone struggles with this type of wildlife photography. To increase your chances of getting sharp pictures of birds in flight use a fast shutter speed, AI Servo autofocus tracking, and frame the bird in your viewfinder way before you want to actually take pictures since this allows you more time to get used to tracking the bird and keeping the focus point on it.

Bosque del Apache is an amazing place in terms of its birdlife. There are few things like the sound when all the geese take flight all at once around sunrise. It is definitely worth a visit for any wildlife photographer or birding enthusiast. Just don't expect to be there alone, its like the Masai Mara of North America in terms of number of visitors. 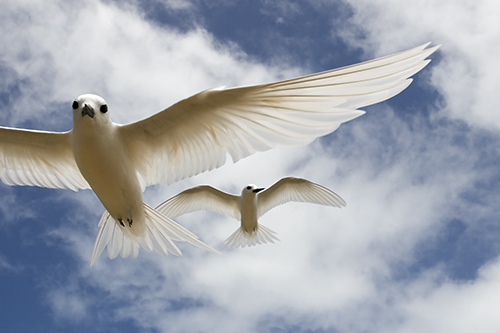 CTC: What is one of your favorite photographs, either for the composition or the memory it invokes?
SK: The mountain lion is definitely my current favorite but all images are special to me since they remind me of an amazing time I shared with an animal. This picture of a pair of fairy terns is one of these moments. It was taken on Midway Atoll in the middle of the Pacific Ocean, an island group occupied by 63 people and 2 million seabirds. These terns are incredibly curious and the female in the front of the picture was only about 12 inches from the front of my lens (so close in fact that I could feel the wind created from her wings on my face). The male is following her as part of a courting ritual to show her how worthy he is. I love the composition since its a little bit more abstract but more than anything I love how it reminds me of these amazing birds and their beautiful nesting island.

CTC:  We too like this image very much. Seabass, thank you very much for taking the time to share your photographs and thoughts with our readers.
Posted by JK at 12:13 PM