Last of the High Plateau

After these pictures there may be a little bit of a drought in camera trap photos from Santa Cruz County.  We had to pull some cams for drying out and maintenance. We have been getting rain of biblical proportions in Santa Cruz County for the last month.  But the good news is that cams are back out in the field and the sun is shining again.

In the mean time I will post some data for Q1 of our efforts at YLR.  Check back for those in a week or so.

These are the last of the plateau pictures from YLR taken with the Scoutguard.  Going out there a few mornings ago the grass is very high everywhere outside of the game trails so we have a new wrinkle to deal with, but at least the cams will be a little more dry.

On to the pictures.

First was a striped skunk that stopped by the set a couple of times (or maybe it was more than one skunk).


The bobcats really like the High Plateau and regularly cross the wetlands to get there as we also saw them on the other side of the lagoon arms on a regular basis. 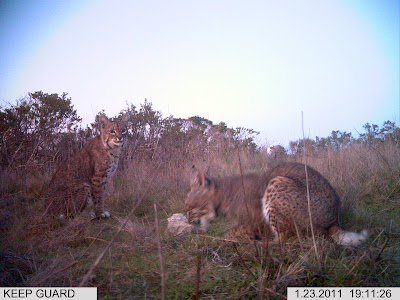 I placed some Predator 700 lure under the rock that mom is furiously cheek rubbing on, while the kitten looks on into the distance.  This picture was taken about 5 hours after we placed the camera. I wonder when we will stop getting pictures of these two together or when mom dens up to give birth to a new litter and disappears from our sights for a while.  This is prime mating season and with a 60 day gestation period I would think it should be just about anytime now. 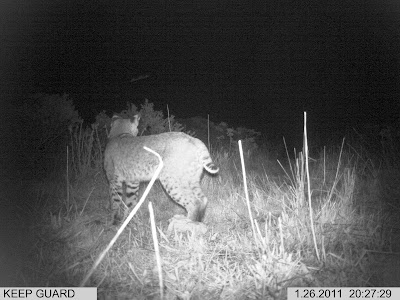 A bobcat stopping by at night. I am not sure if this is either the mom or kitten or another individual. I lean towards mom because it is pretty heavily spotted and the third individual we have seen on the reserve has very minimal spotting, but it is possible that it is a fourth individual.  I don't have many pictures from this angle to compare striping to. 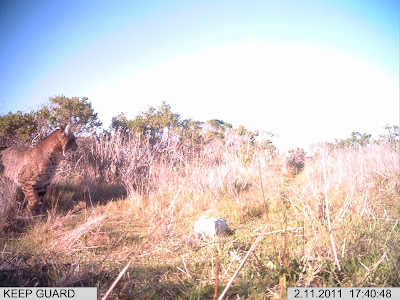 This does not appear to be mom or the kitten but a third individual.  Perhaps the less spotted, probable male we have seen both in person and on the camera trap.  It is not nearly as spotted as mom but maybe exposure issues make spotting more or less prominent based on the light and trick our eyes.  It also does not appear to be the kitten as the front right leg seems to have more of a bar pattern and has a distinctive "V" shaped spot just below the back part of the shoulder that are missing on the older kitten above.

Hopefully we will have updates on our resident bobcats in a couple of weeks.
Posted by JK at 9:01 AM