I previously posted some bobcats from the first week of a set in Santa Cruz County, CA.

The set was up for a total of 15 days and bobcats showed up during the second week too.

In two weeks we had 12 visits with 13 bobcats total.  One visit had two bobcats in the same visit.  In the 12 visits there are at least two individuals, but likely three.  I don't think there was any more than three bobcats captured at this set.  The time between visits ranged from 1.5 hours to 100 hours with a mean species visit interval of 33 hours.  I define a visit as >1 hour between images of the same species.  Visits were split roughly evenly between day and IR images.  This was a well lit set so IR correlated well with the sun being below the horizon.  Below is a graph of the visits binned into hour intervals for bobcats and coyotes for this set, with yellow being daylight hours and gray being night hours. Clicking on the graph will enlarge it. 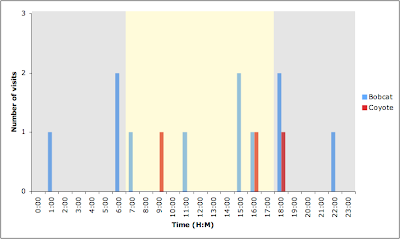 Some data of interest for this set is as follows:

The number of birds, small mammals etc are the number of images not visits.  I still have to work out the complicated excel equation to get more precise visit data grouped by type of animal. Complicating the equation is if there is more than one animal in a visit, for example gangs of raccoons.  In that case, I think the total would be more informative as four "individual raccoons" rather than one "raccoon visit," but hopefully I will have that worked out shortly.

I did not ID all birds in this set hence the number of ID species being lower than it could be.  I will discuss the birds of this set once I finish IDing some of the Little Brown Birds.  With almost 2 visits a day and a positive trigger percentage over 90% I was quite please with this set despite the very heavy rain that occurred throughout most of it.  Bobcats were the most frequent visitors, followed by birds in general and then raccoons and coyotes.

The non-bird species list at this set was Bobcat, Coyote, Raccoon, BT deer and Striped Skunk.

The IR flash seems to be worse and blowout even more in wet conditions so this first photo is even worse than normal but shows two bobcats.  The previous photo in the series had the bobcat at the top of the slope in a crouched laying down position while the second one was just coming into frame at the bottom of the slope as if waiting in ambush.  I like to think it was the youngster getting ready to play attack mom.  I am going to have to do like the Codger and try and dim my IR flash a bit.  Maybe RandomTruth's upcoming post may have some more ideas on doing this.