The other week I uploaded some videos to show my 6th graders the results of the camera that they set up. One video in particular that they enjoyed showed a bobcat rubbing its cheek on the camera itself.

Later, a question was raised by a fellow camera trap warrior - was this a bobcat? Could it actually be a domestic cat?
I had just assumed that any feline-looking creature captured by our cameras would be a bobcat. The thought that a domestic cat would be wondering around wild West Marin never entered my mind.

I then began to ask the simple questions that lead to bobcat identification -- does it have black tufted ears, spotted coat, black barring on the legs, etc.

The video offers few answers, with its low quality and limited view of the animal.
You also see a somewhat bushy tail and a compact body -- allowing for the domestic cat thought to remain, but a final decision still inconclusive.

It is here where the still camera 25 feet down the trail becomes our ally.

6 minutes earlier (according to the timestamp) a bobcat comes up the trail towards the video cam. 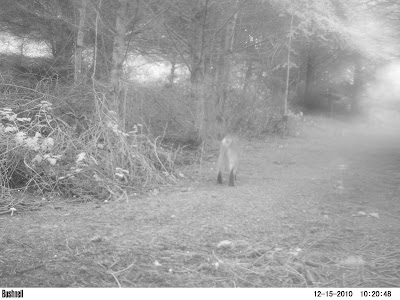 When reviewing previous data, however, a discrepancy between the internal clocks is observed of about 6 minutes, in favor of the video cam. This is determined by comparing shots that show the IR flash of each camera and a similar capture, whether it be with animal or a blank scene.

Still, the case is not solved. Perhaps these are two separate visits, with the bobcat close behind, tracking its cousin?

Luckily our cheek-rubber visited the video cam two other times. The still camera also made captures at similar times. 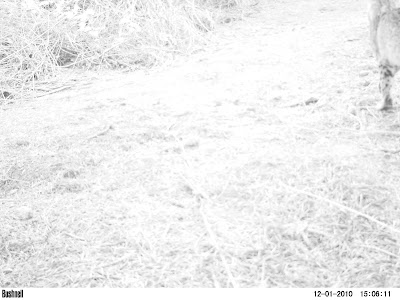 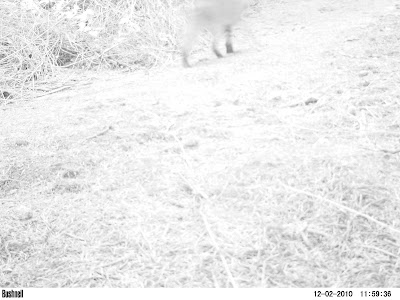 A close look at the 12.2 video offers up this washed out still: 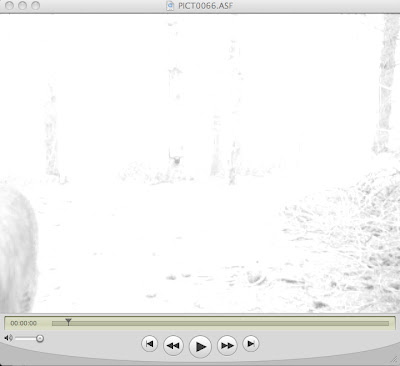 This is all the evidence.

Just another bobcat, or a bold and curious domestic cat off on adventure?
Posted by christian at 7:05 PM