When I saw the two bobcats while checking cams a couple of weeks back I wrote that it may have been a pair, but after seeing some new camera trap images and a comment by Aviva R. I am now leaning towards mother with a kitten from last year. Bobkittens (cubs?) may stay with their mother right up until the time that she is going to birth a new litter.

Do you guys have any thoughts on the pair vs. mom/kitten?

Here are two successive shots of two different bobcats the night I placed the camera.  You can tell they are different cats by their ear shapes and overall body sizes.  The little one lead the way.

The IR flash is harsh, so I was hoping I got some day time photos of them too and was in luck when one of them walked by the camera again the next morning coming from the same direction that they did the previous night. 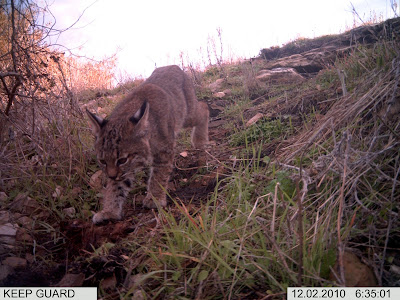 Four days later a bobcat made three separate appearances.  Once at 11:48, again at 16:34 and a third time at 18:03.  I am not sure if all images were of the came bobcat or whether they were multiple cats.  I had my camera set to take pictures every 30 seconds so it is conceivable that both cats were together and I just missed the second animal.  If the second animal passed the camera under 30 seconds after the first, no image would have been taken.  I adjusted the camera to take pictures more often in the future.


Stay tuned for more bobcats from week 2 at this set.
Posted by JK at 3:52 PM