A Trail Of Two Cameras pt. 1

On the first visit to the Marin site, there was one spot that we knew was going to be a productive area.

One Bushnell Trophy Cam was attached to a Fir, looking up the trail in September. Over the following two months, the results were tantalizing. 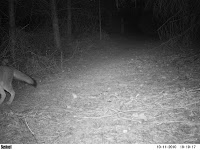 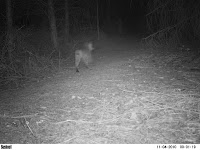 The limitations of the camera were obvious, but we knew there was more to be seen from this spot. For all of the coyote scat, there was only one probable coyote capture in 53 days, despite physical evidence left by them.

My co-teacher, Ryan, was fervent in the belief that we use the Bushies for all that they could bring to the table. That we introduce an additional cam set to shoot video -- looking down the trail.
We did so during our class visit in early November.