I pulled the camera from our first set at YLR last Wednesday and finally got finished with tabulating the data and looking at the images carefully.  The last week of instruction at UCSC was stealing way more of my time than I would have liked.
Briefly, the camera was up for 14 days in a Willow thicket.  We recorded 3 species, plus an unidentified critter who barely got in the frame.  There were 9 separate visits (10 if you count two raccoons visiting the camera at the same time as separate visits) which equaled 0.66 visits/day.  The camera took 29 pictures, 26 of which had animals in them for a positive trigger rate of 89.7%  and 2.1 triggers/day or 1.9 positive triggers/day.  I will play with adding some of the this data in chart form in the future if people find it insightful at all.
Now to some pictures: 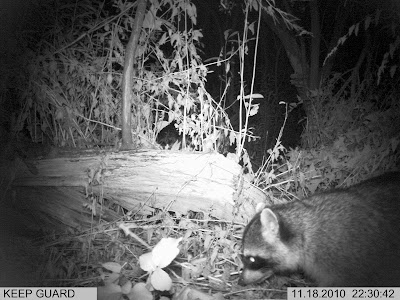 I struggled to get a good raccoon shot.  They were almost never in frame or way too close to the camera.  I even got a blurry belly shot as one raccoon came to check out the camera.  All raccoon images were in IR and they seemed to be most interested in the ground cover in front of the camera.  Raccoons visited three times and there were at least four individuals.  They visited on days 3, 11 and 12 between 23:30 and 23:55 each time (time stamp off by one hour).  The day 11 and day 12 visits were only 24 seconds off of being exactly 24 hours apart.  That masked bandit keeps a pretty regular schedule. 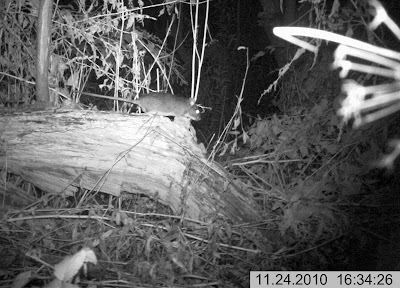 A Dusky-footed Woodrat was the first visitor to the camera coming by on the first night.  It reappeared on Day 2 and Day 8, when the above picture was taken.  This set was around 20 meters from the midden that I posted earlier, so maybe this rat lived there.  Of course I don't know if the three visits were the same rat or two or three different rats.  The woodrats appeared as early as 17:34 as you can see in the above image (time-stamp is off by one hour).