Bad day to leave the DSLR at home

Bobcats two days in a row!

This time a pair at Younger Lagoon Reserve.  I had a Canon point and shoot with me at the time but did not bring my DSLR.  This was supposed to be an in and out mission to check on a camera and only possibly move it, so I went light.  I won't make that mistake again.

The pair of bobcats were pretty bold and one of them sat there watching me for 5 minutes or so as I snapped a few photos and watched it fill up my binoculars.  They were a little different in size and I suspect the larger bolder one was the male and the smaller shyer one the female, but this is pure speculation.  Bobcats do not show strong sexual dimorphism, but when they do it is strongest in the coastal low-elevation portions of their range (Dobson SF and Wigginton JD).  Considering the bobcats could hear the waves of Monterey Bay from where they watched me I think that qualifies as coastal.  I watched them for a bit and might have been able to sit there for hours without them spooking, but unfortunately they were sitting in the path I needed to go down.  I turned back to where I had come from a waited and few minutes and then came back around the corner but the larger one was still sitting there blocking my way.  I decided to very slowly keep moving towards them and they eventually, very calmly, sauntered into a willow patch.  It was such a treat to see them and have them never spook, just retreat at their own leisurely pace.

White-tailed Kites, Elanus leucurus, were putting on an aerial show, chasing each other and hunting in the fields.  I saw at least 5 individual kites today with a total of 8 sightings.  Some sightings may have been a previously seen kite.  Next time I am out there I will have to try and photograph these guys with a DSLR. 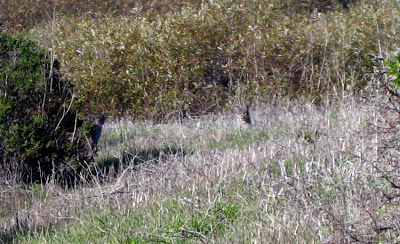 Not super easy to see, but both of are in this photo. 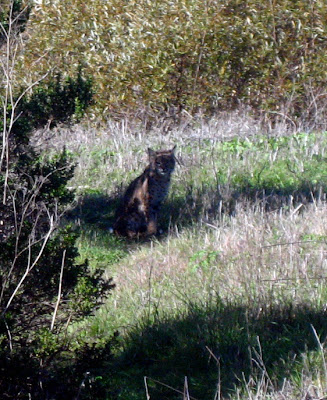 The larger bolder animal.  Sat there looking at me for quite some time. 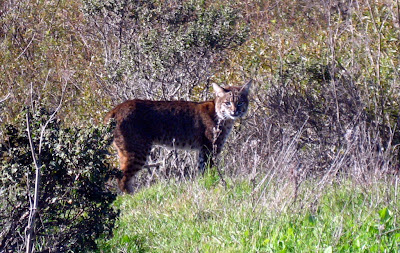 The shyer, redder, smaller animal
These three photos were cropped.