Screechy in the High Country

Last summer, the call of the Sierras introduced Camera Trapping Campus to the wild, delirious world of camera trapping.

Less than a year later, we return early: slightly craftier and eager for challenges.

Assembling with a crew consisting of the Codger, Random Truth and a few other chums, we set up cams for the Codger's workshop.

A great time was had exploring new habitats and placing some cams in locations that had intrigued us the year before, but were unfortunately passed over due to time limitations.

After a hard day's work, the crew settled in for the night at an agreeable, cozy cabin. A hearty feast was prepared to fill our empty stomachs while stories and schemes were passed between the merry group. Codger and Random Truth were fresh off two successes with "Hornly", a plastic Great Horned Owl that attracted swift attention from the real deal.

Thus, it was decided that we must continue the experiment, this time with a homemade Screech Owl decoy placed in the backyard of our cabin. 3 hours of Western Screech Owl calls were loaded onto Random Truth's Ipod and the decoy was deployed at 9:00pm, with three cameras focused on the furry fake -- two homebrew cams courtesy of Random Truth and Sean P. respectively, and a Bushnell Trophy Cam set for video by yours truly. 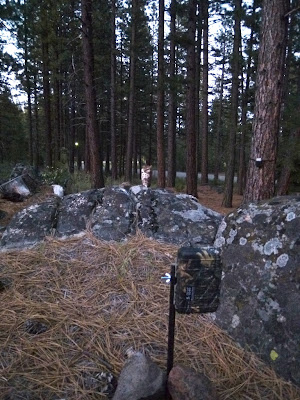 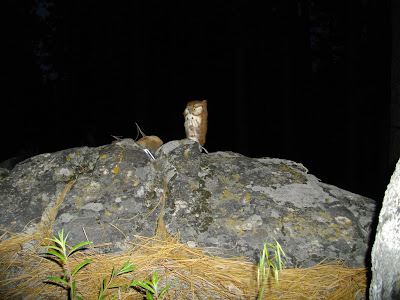 shot of Screechy from homebrew 1


The calls pierced through the mute night, providing a soundtrack for our after dinner beers. Minutes after midnight, the Ipod had done its work and shut down. We had not observed flashes from the homebrews, but regardless hoped for the best and retired to bed.

A morning check-in provided us with success, but not one we were expecting: 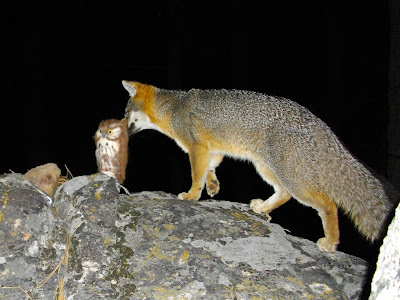 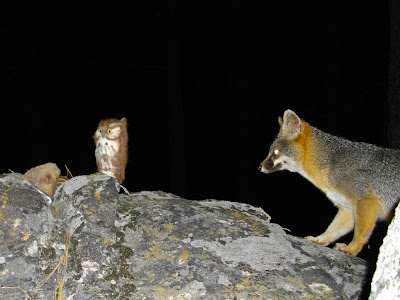 
3:22 am visit
Did the call of "Screechy" bring in our Fox friend? Unlikely, for the delectable smells of our feast (bacon-wrapped meatloaf) and an additional treat left in a nearby rock crevice (roadkill squirrel) would have provided a far greater and expected attractant.
Posted by christian at 9:13 PM