Phibs in the Desert

It has been almost a month since I showed you the Desert Woodrat camera trap photos and promised I would tell you about another visitor to the midden so better late than never ... 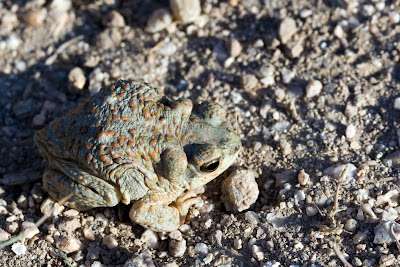 It was certainly an unlikely visitor in the Mojave Desert in May, but the Providence Mountains have given us surprises before.  I found two of these Red Spotted Toads, Bufo punctatus, while setting the midden set.  I ran into the first one as I walked to the midden and was delighted to catch it.  The second one was right at the midden and tried to hop into the cholla fence when I grabbed him.  I got a cholla spine in the finger, but the toad came out unscathed.  One of the toads was certainly a boy as he would buzz and vibrate when held in your hand especially if you gave him a little love squeeze him like another amplexing male. "Let Go of Me!"

I then went back to camp and put toads in unsuspecting hands and laps. Quite the surprise to feel the cool touch of an amphibian in the middle of the desert. 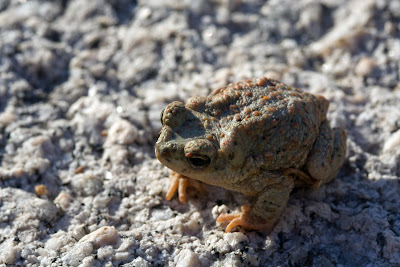 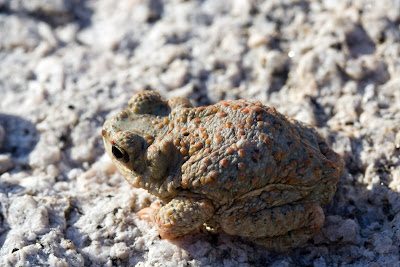 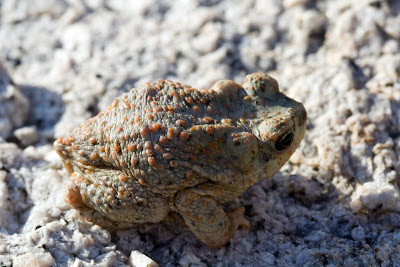 These photos don't have the best lighting as I took them in the evening light just before re-releasing them to go on their way.

Two years prior, while in this same spot in the Providence Mountains in May and 90°F weather we found another Bufo.  I think there is probably nearly near year-round water in the bottoms of the rock pile vein that makes one of the fingers of the Mountain range. An old spring shows up on some maps.
Posted by JK at 8:30 AM