Last summer, there were optimistic thoughts for the river otter field studies my students and I were engaged in. Our cameras had been collecting consistent solid videos each period, the students were learning signs of otter in the field and we were observing several critters during our field work, including an epic hunt of a coot.

The new school year rolled around and the pendulum swung back. Cameras malfunctioned, were swallowed up by a rising pond and with new human disturbances, the otters vanished.

Environmental Science curriculum shifted away towards studies of coho salmon and coast redwoods. The responsibilities of Adult Life also intensified and with it, camera traps began to capture nothing but dust and cobwebs.

Late in the school year, a handful of otter reports began to trickle in (PSA: please submit any observations you have to Otter Spotter !) and with the days winding down, I finally mustered up the opportunity for the class to ramble down and check things out with our own eyes.

8 months of disappointment were pushed aside as we were given another hunting performance (unsuccessful) and the scat-splattered trail gave communication that several otters were likely residing.

Cameras were deployed in two new locations, with a homebrew being used for the first time. 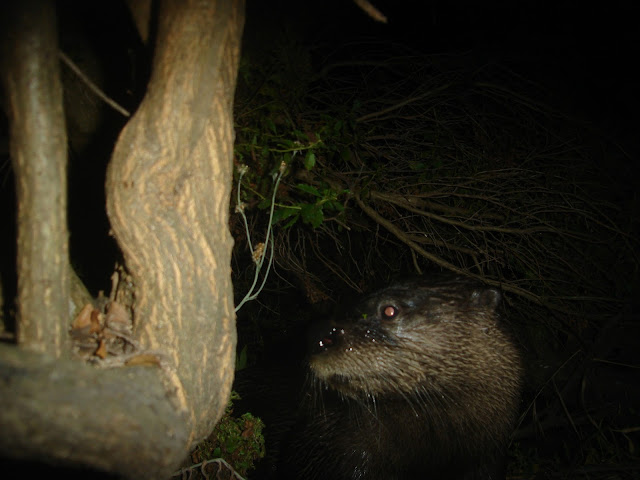 A few other critters dropped by to check in:

Hopefully these charismatic beasts continue to stick around for next year's students to study.

Posted by christian at 1:04 AM