Into the Fox's Den

While heading to town for ice, water, and to drop off garbage towards dusk we saw a kit fox, Vulpes macrotis, cross the road in front of us. It danced across the road like an awkward ballerina and we pulled over and immediately found sign of dens. Luckily I had a homebrew in the back of the car and Christian had a Bushnell set to video.


We put the camera on the den and came back the next morning to what we thought would be dozens of kit fox images.  We had seen the kit fox, we found a den and active sign, but no kit foxes on the camera. Just a bunch of its prey items, the kangaroo rat.

We changed the angle of the camera and left it up for another night. When we came back the next day on our way back to the Bay Area we picked up the cams.  At the time I thought I had only gotten one crappy kit fox picture. After getting home I saw that there were two images and this first one was not as bad as I had originally thought. Too bad he didn't look at the camera, but at least it us in full frame.  The den is in the lower left corner of the image and the camera is set-up behind the den, so as not to point right down into the den.


And then the K-rats come out to dance with the devil, practically crawling into their predators den.

Then the fox comes back for one more image and one more sniff at the scent rock. I did not originally see the fox in this image while viewing on the camera.


The Bushnell cam was placed around a creosote bush about fifteen meters from the burrow and cam one. 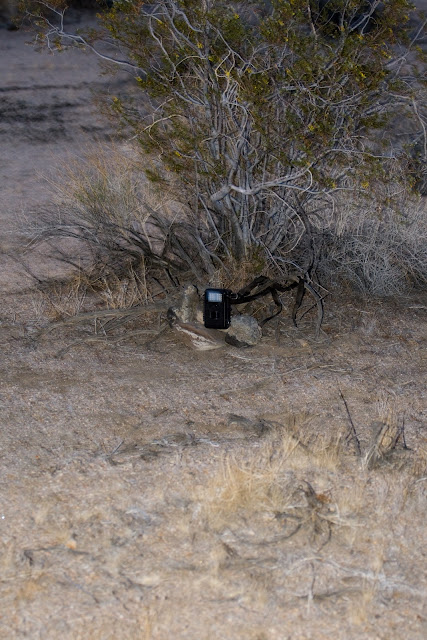 
Here, he makes a quick appearance rolling around in the gravel and then comes by the camera to smell us humans.