Bringing you Part II of the beach set.  Again, I am leaving out a good chunk of images of researchers including some good action shots of what appears to be pitfall trap building. We did not get any new mammal species but got some fun new birds.

First up is another killdeer, this one looks like a juvenile under stormy skies.  Can you even find it in the image? Killdeer reside in Santa Cruz County year round.


This time a bobcat actually looks in the direction of the camera instead just giving us a look at its tail.  Still not the glamor shot I am aiming for though.  I need it to get closer to the camera as the little dune is hiding the full animal a bit.


This was just going to be a stormy sky shot but then I found the little bird that set off the camera.


A couple of Canada Geese in the background.  Bummed to have missed the Cackling Goose that was hanging out with these two for a couple of weeks.  In the fore-front is a Whimbrel, Numenius phaeopus.  The Wimbrel is one of the most common of the curlews and migrates through the Monterey Bay Area as well as resides here.  Be sure to check the link for some ebird.org data. The Whimbrel only showed up on the camera one day, but there is a pretty steady stream of sighting at YLR with a slight peak in April when these pictures were captured. 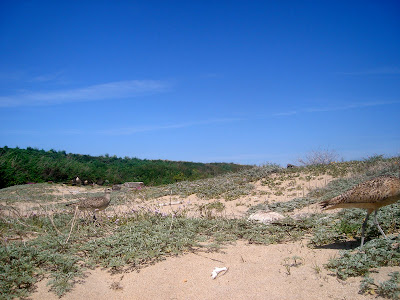 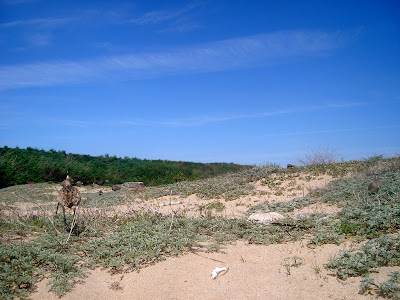 A young killdeer standing atop the dead seagull.
And finally a sunrise image of some Brewer's blackbirds, Euphagus cyanocephalus.